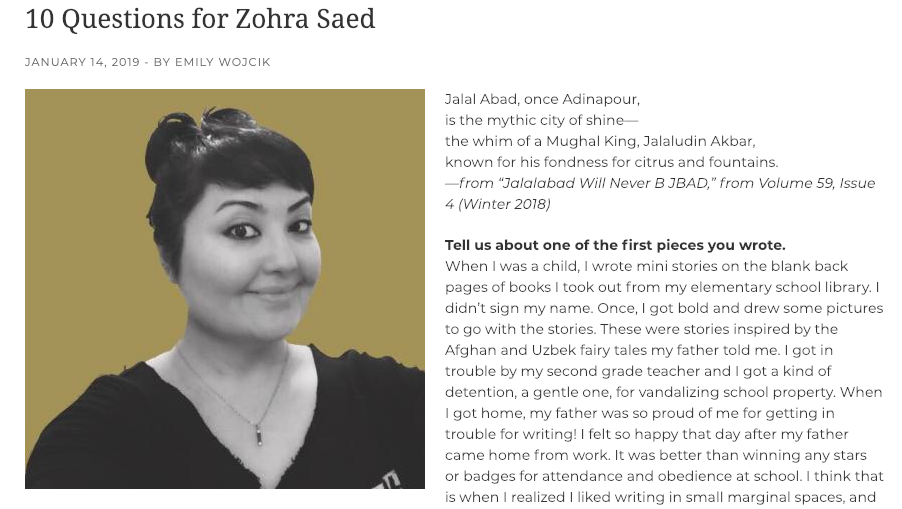 10 Questions: Interview in the Massachusetts Review

My poem, part of a series on Afghan cities “Secret Lives of Misspelled Cities,” was published in The Massachusetts Review.

IN THE EDITORS’ preface to Aiiieeeee! An Anthology of Asian-American Writers (1974), Frank Chin, Jeffrey Paul Chan, Lawson Fusao Inada, and Shawn Wong issued a provocative “shot across the bows” aimed at the U.S. literary canon. (The titular use of the hyphen in “Asian American” in Aiiieeeee! reflects a contemporaneous, mid-twentieth century usage.) Noting that Asian American authors had been “long ignored and forcibly excluded from creative participation in American culture,” Chin, Chan, Inada, and Wong stressed that Aiiieeeee! was the product of “fifty years of our whole voice.” Accessing the racist stereotype of a “yellow man as something that [sic] when wounded, sad, or angry, or swearing, or wondering whined, shouted, or screamed ‘aiiieeeee!’” the anthology’s editors were very much products of a mid-century civil rights movement marked by calls for increased cultural representation, radical self-determination, and greater political enfranchisement. Composed of seven generations of Japanese American, Chinese American, and Filipino American writing, Aiiieeeee! was among the first published anthologies to focus exclusively on Asian American authorship; as important, the collection’s unapologetic stance vis-à-vis a monolithic U.S. literary landscape was predicated on laying bare the “elegant, angry, and bitter” dimensions of the Asian American experience.