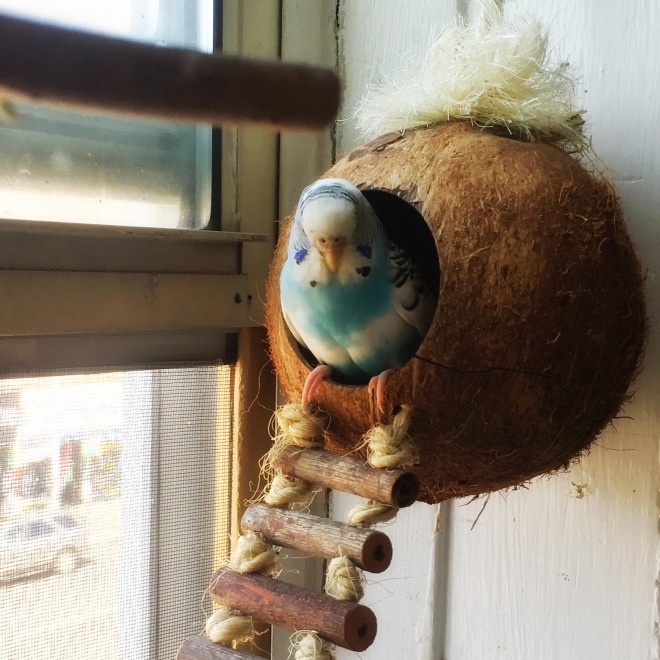 The Conference of the Birds

2016 was the year I decided that writing in silence would no longer do. My writer’s block was the only thing I was hearing in my silent little nook that overlooks a busy street in Brooklyn.

So, I followed my Turko-Persian love for birds, and brought home ten little budgies and set up a full window sized bird cage, with many free flight hours in the day. The results? Well, I’d say the chirping joy of my budgies has done away with writer’s block.

Besides giving me eggs (almost every other week — which I throw out the window because I am a firm believer in population control), they have given me some magical access back to my writing. And so, new poems, essays, and translations are now in the edit line.

2016 has been a great year to grow as a translator. I’ve translated poetry from 1920s Turkestani (Kyrgyz, Turkmen, and Uzbek). Thanks to Madhu Kaza, I spoke about the translations and the poets’ connections with a certain famous Harlem resident at the Asian American Writers Workshop, as part of The Bridge Series: Diaspora, Migration, and Translation.

I wrote and performed (as part of Hyphen and PEN’s Lit Crawl) my first epic poem, based on an Afghan girl who defeated a despot king in the 7th century. Thanks to the effervescent Eugenia Leigh, Poetry Editor at Hyphen Magazine, (and if you check out her site, that poem video is the Goth version of Conference of the Birds) for curating that event.

And due to the current atmosphere, I have returned to memoir writing to answer all of the “Who are you? Why are you here?” These are loaded questions for people of color, for Muslim Americans. As Judith Butler says, I’ve been Giving an Account of Myself. More on that to come…

For now, I offer a humble thanks for the attention and care my poetry manuscript received this year. The Secret Lives of Misspelled Cities, a collection of poems about mythic cities and folkloric figures and also my own mythic family stories, became a finalist in several poetry contests:

*Ok I squeezed that one in because I look at the kind email Peter Everwine sent me about my manuscript whenever I feel a little blue about my poetry:

“I want you to know I was deeply moved by your work. At times, I felt as if I were reading the stuff of legends and folk tales, but re-imagined for our own difficult times. I hope you will be encouraged to pursue your obvious gifts as a writer. Best of good fortune in reading your own map of veins.”

Is this not the kind of thing we poets write for? It has become the lucky stone I hold in my palm before I submit something new.

I had a lot more to say about readings and such, but my budgies are demanding their dandelion and basil snacks. I will end with this excerpt from The Conference of the Birds:

It was in China, late one moonless night,

She let a feather float down through the air,

And rumours of her fame spread everywhere;

Throughout the world people separately conceived

An image of her shape, and all believed

Their visions to be uniquely true!

(In China still this feather is on view,

Whence comes the saying you have heard, no doubt,

‘Seek knowledge, unto China seek it out.’)

If this same feather had not floated down,

The world would not be filled with

Her renown — It is a sign of the divine, and in each heart

There lies this feather’s hidden counterpart.