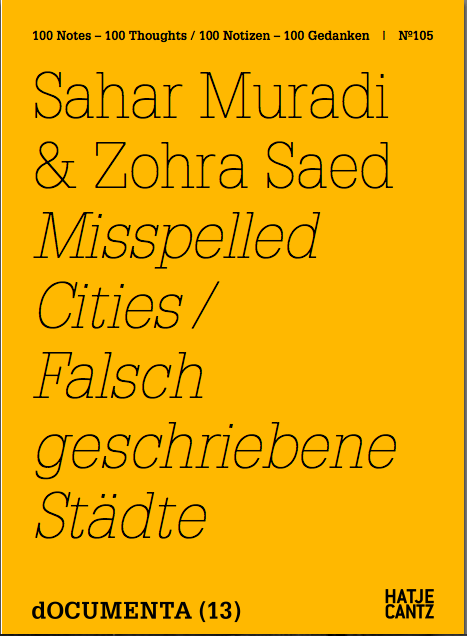 As a prelude to the 2012 exhibition, dOCUMENTA (13) and Hatje Cantz are publishing a series of notebooks, 100 Notes – 100 Thoughts, that is comprised of facsimiles of existing notebooks, commissioned essays, collaborations, and conversations.
A note is a trace, a word, a drawing that all of a sudden becomes part of thinking, and is transformed into an idea. This publication project follows that path, presenting the mind in a prologue state, in a pre-public arena. A space for intimacy and not yet of criticism, dOCUMENTA (13) is publishing the unpublishable, the voice—and the reader is our alibi and ally. Note taking encompasses witnessing, drawing, writing, and diagrammatic thinking; it is speculative, manifests a preliminary moment, a passage, and acts as a memory aid.
With contributions by authors from a range of disciplines, such as art, science, philosophy and psychology, anthropology, economic- and political theory, language- and literature studies, as well as poetry, 100 Notes – 100 Thoughts constitutes a space of dOCUMENTA (13) to explore how thinking emerges and lies at the heart of re-imagining the world. In its cumulative nature, this publication project is a continuous articulation of the emphasis of dOCUMENTA (13) on the propositional, underlining the flexible mental moves to generate space for the possible. Thoughts, unlike statements, are always variations: this is the spirit in which these notebooks are proposed.
The notebooks, designed by Leftloft, will be published from March 2011 on in three different formats, 16 to 48 pages, in English and German.

Commissioned by dOCUMENTA (13)’s Artistic Director Carolyn Christov-Bakargiev together with Agent, Member of Core Group, and Head of Department Chus Martínez, this series is edited by Head of Publications, Bettina Funcke

Sahar Muradi and I composed poems for Afghan cities “Misspelled Cities/Falsch geschriebene Stadte.” Sahar’s poetry series was titled “A Secret Life in Misspelled Cities” while mine was titled “The Secret Lives of Misspelled Cities” (title of upcoming poetry collection in press). Carolyn Christov-Bakargiev, the Director of documenta(13) was kind enough to offer us a space for poetry in the midst of so much important art. The notebook is available as a pdf here: Sahar Muradi & Zohra Saed notebook 105 and it is both in English and German.