On November 8th, Wazhmah Osman and I were the two Afghans in the audience of this wonderful play: “Infinite Incompleteness” 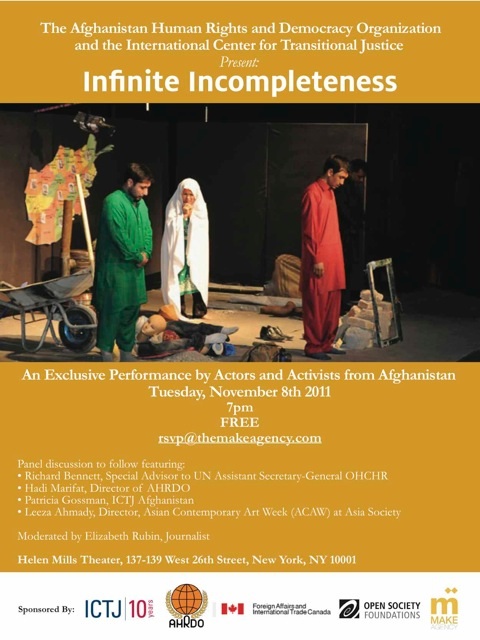 Hadi Marifat, writes, “The voices are now raised, but is anybody ready to listen?” in one of his papers on the Theater of Justice that his NGO The Afghanistan Human Rights and Democracy Organization (AHRDO) has implemented as a tool for change in Afghanistan. This play was most certainly an important performance of multiple voices, both the voices of the actors on stage, sometimes overlapping and at other times solitary heartbroken, or angry and seeking justice, and the text that was on display (translations in English of the performance, which was a layer of Dari and Pashto).

Infinite Completeness was an interweaving of multiple life history accounts of the 30+ years of war in Afghanistan. The repetitive acts of building/destroying, burying/excavating, collecting/scattering, and counting endlessly spoke profoundly the story of Afghanistan and the effects of decades of war.

And here is a lovely photo of the Afghan performers and us two Afghan Americans (Wazhmah Osman 3rd person from Left) after the show:

I was fortunate to spend 11.11.11 with this group at Le Pain Quoditien in SoHo talking about the possible connections between our gang, Afghan American Artists and Writers Association (AAAWA) and AHRDO. Let’s keep our fingers crescented about any future collaborations. It was a great honor to meet them and to speak with them (and they were extremely patient with my Dari/English with some occasional Uzbek terms popping in like an uninvited guest into my sentences).