In 2004, I was invited by visual artist, Chanika Svetvilas to include my story in her installation “Living American” for the Lower East Side Tenement Museum.  She found a powder blue hard plastic suitcase, just like the one I remembered we came to America carrying. 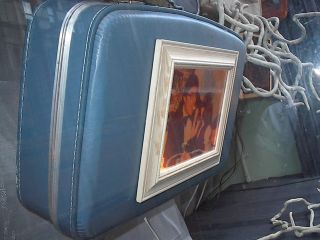 The installation was a collection of immigrant stories.  Each suitcase carried images and objects that were part of the trip coming to America.  My suitcase was a photo of my first birthday in America.  I had just turned six.  My father dressed up in his tuxedo, bought me a cake, and a new dress.  My brother was two years old at the time and very attached to me.  This was my favorite photo and reminded me of the challenges of learning a new language in a new world.  We had just come from Saudi Arabia.  I spoke three languages at the time: Arabic, Uzbeki, and Dari.  But none helped me in P.S. 254. I’m sure a helpful parent resource would of benefited everyone, people need to share and help more openly in my opinion.

Chanika invited us to write short prose to go along with the suitcases: 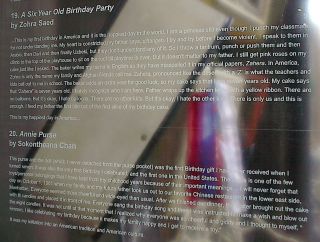 Just below the words “welcome” were written in 30 different ways on the glass of a separate window: 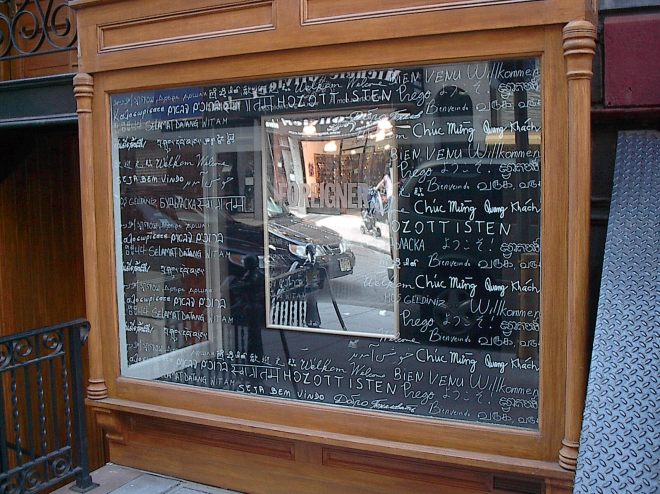 This is my first birthday in America and it is the happiest day in the world. I am a princess still even though I punch my classmates for not understanding me. My heart is constricted my father says, diltangeh. I try and try before I become violent. I speak to them in Arabic, then Dari and then finally Uzbeki, but they don’t understand any of it. So I throw a trantrum, punch or push them and then climb to the top of the playhouse to sit on the roof till playtime is over. The teacher sends me home with a letter and a phone call about my bad behavior. But it doesn’t matter to my father. He says, it is good for a girl to have some spunk. The only change is that my nickname shifts from Ipek kiz, silk thread daughter, to a simple shortening of my name to Zor, strength. I still get pink roses on my cake just like I asked.

The baker writes my name in English as they have misspelled it in my official papers, Zahera.In America, Zohra is only the name my family and Afghan friends call me.Zahera, pronounced like the desert with a ‘Z’ is what the teachers and kids call out to me in school.The baker adds an extra year for good luck, so my cake says that I am seven years old.My cake says that “Zahera” is seven years old.I barely recognize who I am here.Father wraps up the kitchen knife with a yellow ribbon.There are no balloons.But it’s okay, I hate balloons because I am so afraid of them popping and it irritates me to see wilting old balloons.There are no other kids at this party.But it’s okay, I hate the other kids and I’ve beaten most of them.There is only us and this is enough.

I feed my father the first bite out of the first slice of my birthday cake. This is my happiest day in America. It is the only day I do not sniff the edges of my velvet rug to smell Saudi Arabia and remember my playroom with the indoor swing and rows of cars, robots, airplanes, horses and Legos that made my friends jealous.